A few weeks ago, I was presented with the opportunity by British Triathlon of racing in a few world cups (Mooloolaba AUS and New Plymouth NZ) to aid my preparations for the commies. Due to timings and training blocks I decided to only race in the New Plymouth World Cup which was the weekend just been.

I couldn’t think of a better way to gain experience and learn so much. I was up against a very high-class field with the likes of Olympians from all over the world. Now considering this was a senior elite race and I’m in my first year of an u23 I was way out of my comfort zone! But as my coach says “get used to being uncomfortable” and this is exactly what I did.

The race itself was mega hard with probably one of the toughest sprint distance courses I’ve ever raced on! Extra-long swim, hilly bike and run course gave us extra challenges to keep us hot on our heels. My coach Nick Saunders told me the night before “these guys have arms and legs like you, show them respect but don’t think they’re better than you” after these words I knew a good swim was a crucial part to my race. So, without further ordo here’s how it went…

It was a beach start with a 40m sprint into a glassy flat ocean. Conditions were perfect! I was ranked 49th/50th which meant I had all of two positions to choose from when I eventually made it onto the starting grids. I was positions slap bang in the middle (my worst nightmare), I knew I had to keep my composure and rely on my initial first 200m to stay clear of any trouble. I had a good start with minimal argy bargy. This was short lived as we quickly approached the first can. The race turned from a triathlon to a reincarnation of a royal rumble as all 50 competitors clambered over each over to get the best positions. The race started to string out as the faster swimmers got into their rhythms. I managed to come out somewhere back end of the main pack. I was safe! I sprinted up the beach and into transition.

Running into T1 I knew this was a crucial moment as I needed to make the back of the pack. Everything was running smooth, my wetsuit was round my hips and helmet was starting to come on, every running smooth! My wetsuit slipped off my right leg but was refusing to slide over my timing chip on my left leg. I went into to panic mode but eventually it came off, its sound minimal but I probably lost 6-8 seconds in total. This meant I missed the pack and had to do some real chasing! I managed to get into a group with a bunch of other Asian country athletes. We worked hard together to not lose much time but due to the size of the main bunch we would never have the man power to pull them back.

I lead my bunch into T2 and managed to have a fantastic transition heading onto the run-in front of my group. We have been focusing on my leg cadence especially with my top end running with my coach on the Gold Coast (Dane Robinson). I knew it was crucial I applied this in the race. I managed to smash the first lap and was feeling mega good. The fatigue started to flow in on laps 2/3 but I knew all my fellow competitors would be feeling the same. It was a case of finishing in front of the chasing group behind.

All in all, a very good and very tough race. I learnt so much and hopefully I can carry this through to the big event in 10days time. I want to say a HUGE thankyou to my sponsors who make this lifestyle and these opportunities doable so massive creds to Fairway Jersey, TYRsport and sportsHUB. In addition to this the support crew back home; Jersey sport foundation, Nick Saunders (TPS coach) and of course my fantastic supportive family and friends. In addition, my coach on the Gold Coast Dane Robinson (DRPerformance) and all squad, you guys are awesome.

I will now be focusing on my final prep for the games so you won’t be hearing from me until after but expect another blog to follow post-race day! 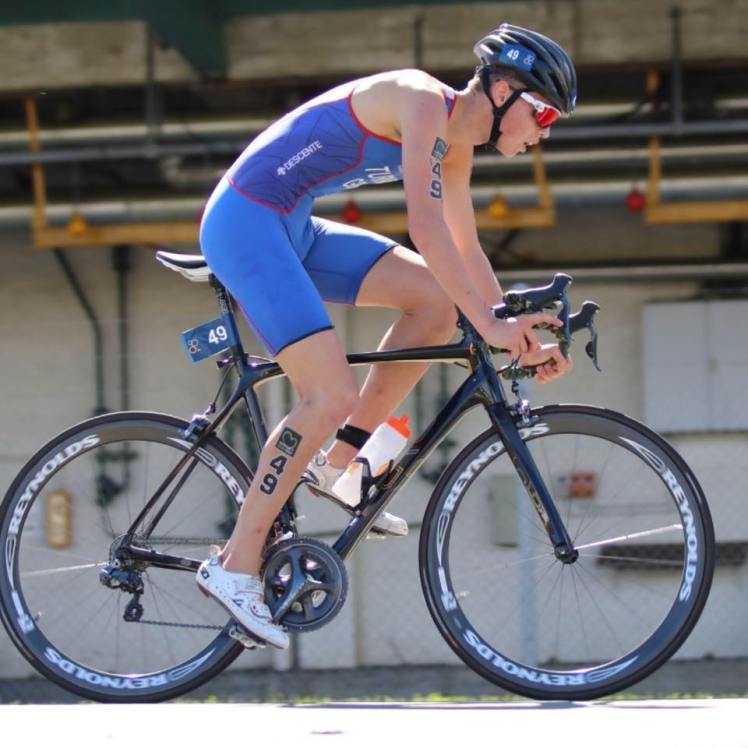